After more than 12 years and 120 issues of of consistent, regular publication, Rockpile Magazine will be closing its doors. 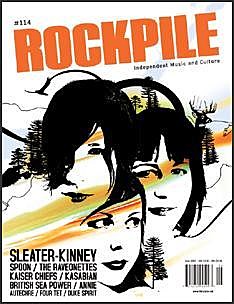 "While rumors have been floating for awhile (mostly due to the fact that the mag became as flimsy as Keira Knightley), word finally came down at the beginning of this week that Rockpile Magazine is over. The Philadelphia-based bi-monthly mag started out as a free publication back in 1994. Ten years later it was sold by founder Joe Kirschen to staffers Mike McKee, Allan Kemler, and Matt McGlynn. In turn, the mag began charging and found brief success as a nationally distributed publication covering the latest in 'independent music and culture.' The mag helped launch the writing careers of many rock critics you read on a daily basis. But the cost of distributing said magazine has finally caught up to them." [Tiny Mix Tapes]

NPR is going to stream one of Sleater Kinney's final performances, the one tonight (Aug 1, 2006) in Washington DC in fact. Also, if you've been following along, you know their FINAL performance went from being Lollapalooza to being a final show in Portland to to being TWO final shows in Portland.

Speaking of streaming Sleater Kinney performances and Lollapalooza, that wll be streaming too.

This is Fake DIY has a tribute to Sleater Kinney: Part one & Part two

The Rogers Sisters are opening for Sleater Kinney at all the shows before Lollapalooza including TOMORROW at Webster Hall.